It is a PADMAN! 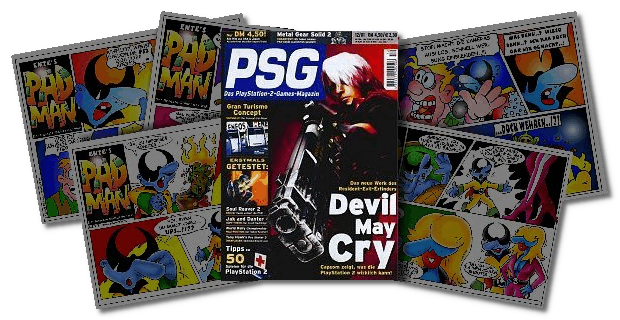 Since ENTE always liked the style of the famous comic artist Peyo, who is known as the creator of the Smurfs, he came up with the idea to create a kind of evil Smurf. By the way, the name PADMAN was not derived from the computer game Pac-Man as it seems, but was composed of GamePAD and BatMAN.

The first issue of the magazine PlayStation Games appeared at the beginning of 1998, along with the first PADMAN comic. At that time PADMAN did not look the way we know him today. For example, he still had three lonely strands of hair on his head and there was a big X where the Pad logo adorns his belt buckle today. His costume shone in green, red and yellow. PADMAN’s glasses were not yet so curved, but rather had the shape of normal sunglasses.

At that time the Pad logo did not yet exist, which developed only in the course of time. Even the first PADMAN comic was quite well received and caused several letters to the editor, PADMAN’s nasty way seemed to work. From then on PADMAN was really raving month after month, because none of the known characters was safe from him. Be it Nintendo’s Mario, Lara Croft from Tomb Raider or good old Duke Nukem, PADMAN “buried” them all!

At some point it happened, the air was out and ENTE simply had no good ideas anymore. Up to eight comic series at the same time, in different magazines, some of them even weekly, left their traces. So it happened that ENTE neglected some of the series more and more, including PADMAN. He simply had difficulties with the content, because he did not came up with some good ideas. This happened coincidentally during the time when ENTE started with his PadMaps. So in a way there was a change of platform. PADMAN said goodbye bit by bit to the comics to finally find a new place in the world of computer games.

In 2001 the market was flooded with console game magazines and it did not look so promising for the PSG magazine either. The poor guys of the PSG editorial got under heavy pressure and the mood sank internally slowly to the zero point. So it was not really good anymore about PADMAN’s future in the magazine. Although the PSG team would have liked to keep PADMAN and still regularly quite positive letters arrived, the board decided that PADMAN had to disappear.

The series was too expensive, too brutal, etc. So the nasty blue nose PADMAN took off his glasses in the 12/2001 issue of PSG magazine and left. Then there was a small wave of protest, instigated by some disappointed fans of the PadMaps, which was quickly nipped in the bud. A few months later, unfortunately, the entire magazine disappeared from the market.

Of course it was a pity that PADMAN was suddenly on the street, but on the other hand it was the best opportunity to revise PADMAN as a cartoon character. It was not just a new outfit, because the old one did not really fit anymore. ENTE created his own little PadWorld, with more blue noses. PADMAN was no longer the only one of his kind.

The complete appearance of PADMAN was revised to make him look cooler. In this new PadWorld there should not be any “real” looking characters anymore, it should become a very own world of blue noses. These found their place then however no more in new comics, but primarily on the PC, in the world of the computer games.

Until today PADMAN has not found a new comic home yet, which is probably because ENTE has not tried so hard yet. At that time he had found with the PadMaps, the PadMod and later with the standalone game World of PADMAN enough occupation for PADMAN and found that he also did damn well there. But the idea to continue the story of PADMAN as a comic series is of course never completely off the table. It was itching in the fingers of ENTE quite a few times and who knows, maybe we may see the good PADMAN again sometime and somewhere in monthly comic strips. 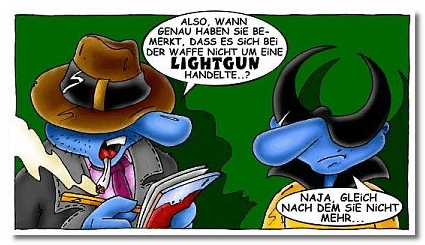 Finally we have a video for you, in which ENTE roughly sketches his PADMAN.