The game type Spray Your Color (SYC) was developed especially for World of Padman and can only be found like this in World of Padman. It can be played alone against all other players or together in a team. Then two teams, blue and red, compete against each other.

In the game type Spray Your Color every player has to spray his logo with a Spray Pistol on a specially designed spray wall to score points. However, this spray pistol requires ammunition, i.e. paint cartridges, which each opponent automatically leaves on the map as soon as they have been taken down. Up to eight of these cartridges can be collected at once. If the player is in possession of one or more cartridges, he may enter a special spray room teleporter, which would not work without these cartridges otherwise. 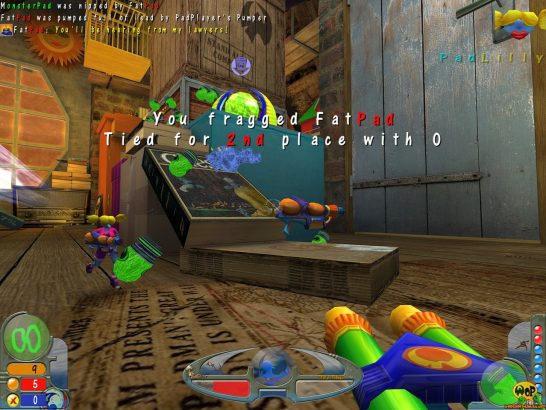 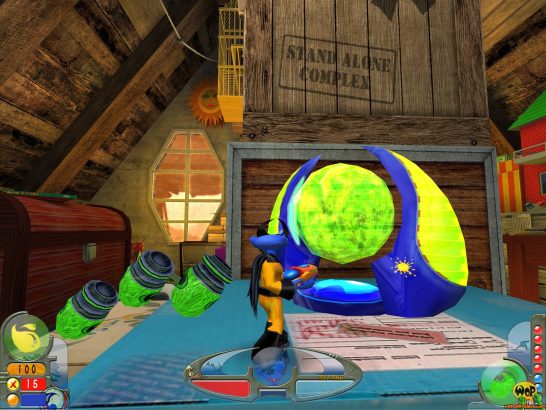 When entering the teleporter, the player enters the so-called spray room, where there are usually two spray walls to which he can spray a logo for each collected cartridge. The weapon in the players hand automatically switches to the spray pistol when he enters and other weapons can no longer be used. Thus the spray room is also a neutral zone in which the player may stay for a limited time. Usually this is 30 seconds. The player may return to the game at any time by another teleporter, regardless of whether he has sprayed logos or not.

Basically, it does not matter which of the two spray walls is sprayed on. This changes when Spray Your Color is played in team mode. Here the player must always spray on the spray wall of his team color, blue or red. If the wrong spray wall is sprayed, a global announcement is made in the game and no points are scored. 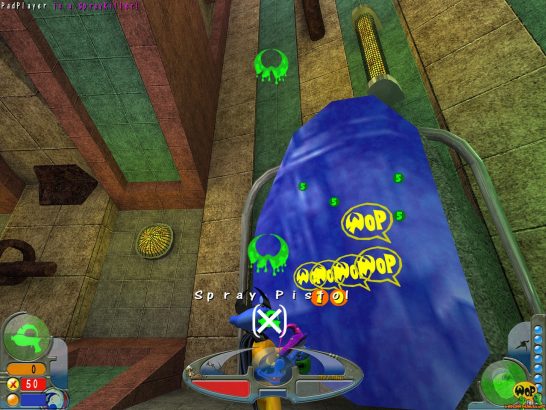 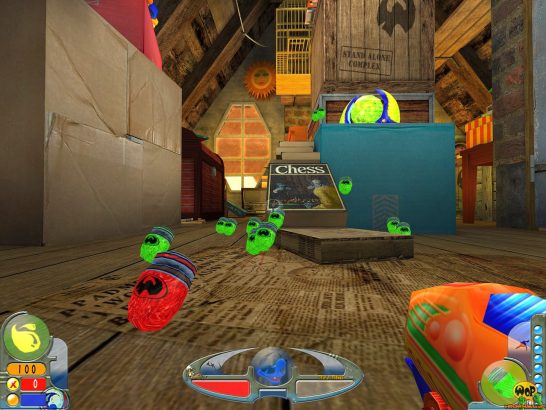 The cartridges are usually dyed green. The cartridge left by the player cannot be collected by himself again. This is then dyed red. This changes as soon as Spray Your Color is played in team mode. Here the player can remove the team’s cartridges, blue or red, from the game by collecting and neutralizing them. So the opposing team can no longer capture them. Possessed cartridges can be dropped at any time in the game by pressing the “Drop Cartridge” button and passed on to other players who can then collect them. This is very helpful tactically, because the player can help a team mate to earn bonus points.

5 points are awarded for each logo sprayed. If a player manages to spray 5 logos one after the other without leaving the spray room, he or his team gets a bonus of 10 points and the award “SprayKiller”. If 8 logos are sprayed at once, a bonus of 25 points and the “SprayGod” award will be awarded again. See the following examples for the awarding of points:

No points can be scored by only shooting down the opposing players.

In Spray Your Color, the player’s HUD is slightly adjusted according to the requirements of the game type. Possession and number of cartridges collected are displayed to the player in the HUD at the bottom right. The red dots symbolize the number of cartridges already collected, while the blue dots symbolize the number of spaces still available. By rotating the 3D model of the colour cartridge in the respective colour green, blue or red in the lower part of the HUD, the player can read which cartridges he has to collect in which colour. 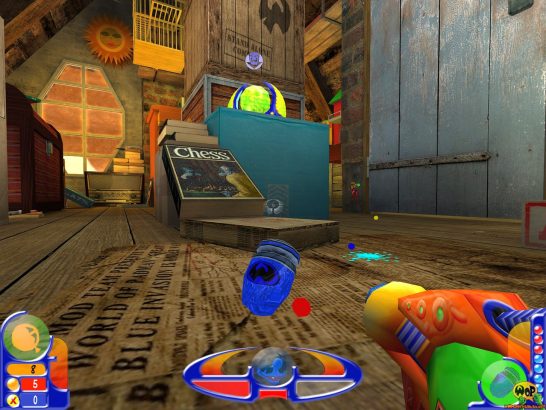 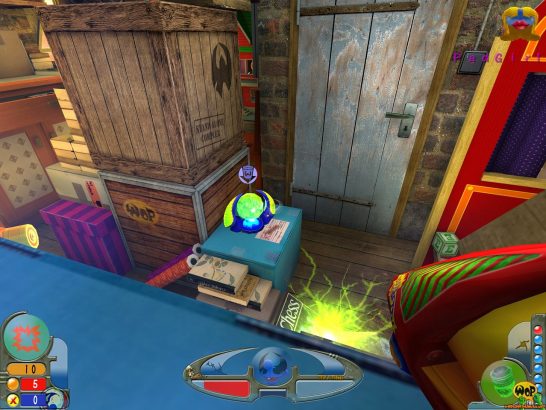 To make it easier to locate the spray room teleporter in the map, it will be highlighted in the game by a teleporter icon, even through walls, if the player has at least collected one cartridge and if this option is activated by the player in the settings. In addition, the shape and color of the logos can be selected by the player in the menu. This can also be done later during the game by pressing the “Escape” key to call up the in-game menu. Under the option “Select Logo” the selection can be made again. Further information can be found in the Menu/HUD section. In team mode, the color of the spray logo is set to the one of the respective team, i.e. blue or red. 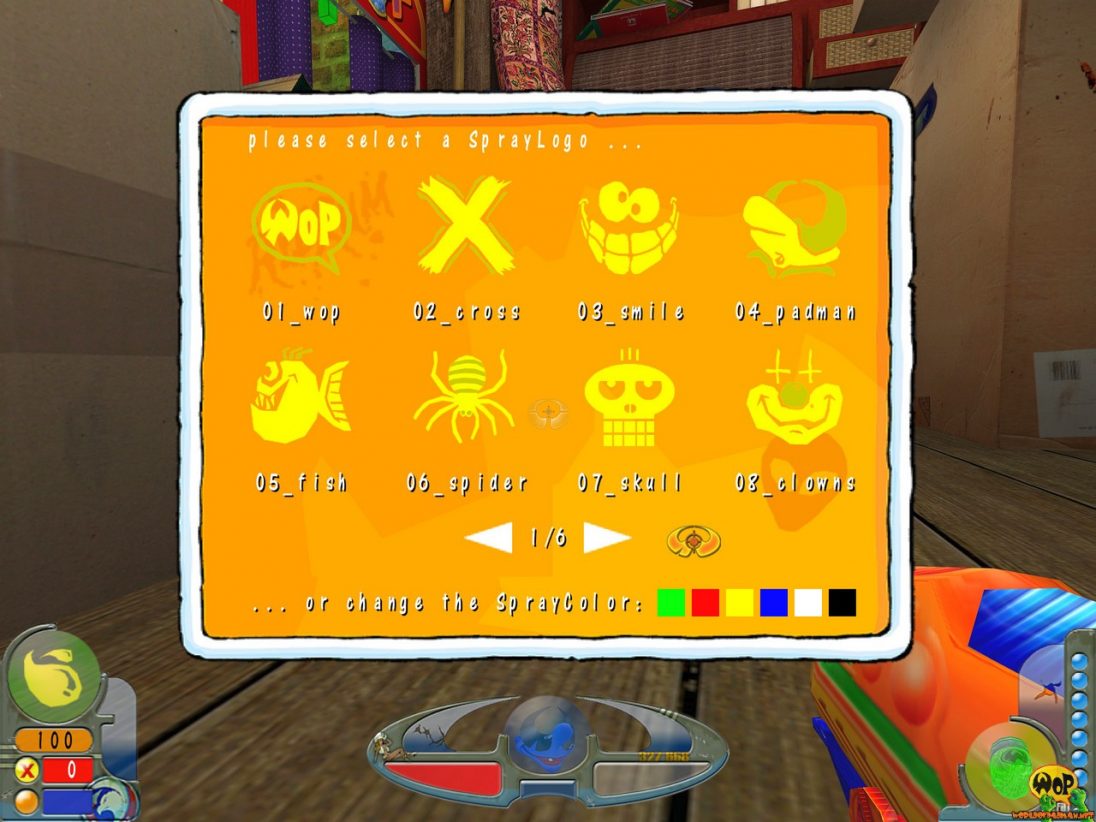 Knock out an enemy and pick up the green cartridge left behind; find the portal, and spray on either wall to score points! Sometimes this can be very tricky when everyone is out to get you, so here are some essential tips:

In team mode knock out a member of the opposing team and pick up your team colour cartridge; find the portal and spray on your team’s coloured wall to score! But that is very robotic, so here are some team play tips: