PADMAN as a player model has been ENTE’s big wish for a long time and actually existed even before ENTE started with all of his PadMaps for Quake 3 Arena in the year 2000. Originally he was looking for a German tutorial to create his own PADMAN as a player model. At that time he had noticed that some players had their own models and he thought that it couldn’t be that difficult. But not only that he couldn’t find a tutorial in German, but he also had to realize that a suitable software to create such a model at that time cost around 10.000 German Marks, that is about 5.000 Euro. There were only two possibilities left for him to either start a call for donations or to leave it alone. Nevertheless, in his naivety he wrote to a few well-known 3D artists, but somehow nobody wanted to bring PADMAN to life. So the plan was born to make PADMAN more popular with the PadMaps, which, as we all know, led to the PadMania. 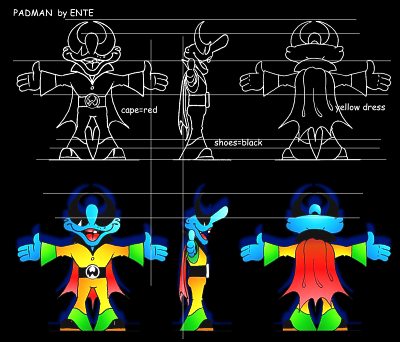 At that time, one or two PadMaps were planned, but it took four PadMaps until a 3D artist was finally found who wanted to create Padman. Arndt von Königsmark was the first to try it and created the very first 3D model of PADMAN. ENTE was more than excited when he saw the first render of PADMAN, but there was a little drawback. At that time Arndt was working in Cinema 4D, a 3D software which at that time was primarily used for film productions. There was simply no possibility to animate and export the model for Quake 3. Therefore it remained only the PADMAN model and ENTE had to look for help again.

So Arndt and ENTE started a campaign and lo and behold, Tony “Tone” Bellott from Australia answered shortly after. Tone was a big fan of the PadMaps and was thrilled to be able to help out with PADMAN. Tone already had experience with Quake 3 Arena, having already brought Rand from the Robotech cartoon series to life under his pseudonym mhm15x9.

With PADMAN, Tone was now able to build directly on Arndt’s preliminary work, but had to make many adjustments and to reduce some details. Many Quake3 models at that time only had about 800 polygons for performance reasons, but PADMAN still managed to get 1188. Besides the model, he also created the UV map and the animations. 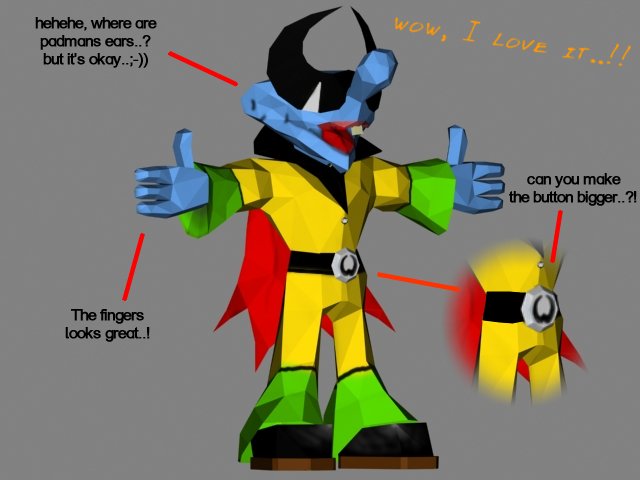 For the skins and sounds ENTE had to do it himself. Both were a premiere for him and he was very afraid to mess up the model with them. But especially with the skins he was positively surprised by his own work, because it turned out much better than he had thought before. It even worked so well that he decided to make a green alternative skin in addition. For the shader effects ENTE got help from CleanerWolf, who made sure that PADMAN’s cape could flutter in the wind and the glasses shine in the sunlight.

On September 1st, 2000 the time had come, PADMAN for Quake 3 Arena could be downloaded from ENTE’s homepage. ENTE’s dream of being able to navigate PADMAN as a player model through the PadMaps himself finally came true. A great feeling! 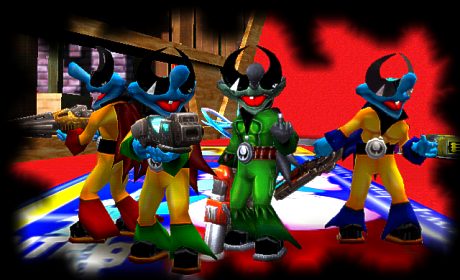 PADMAN for Quake 3 Arena by ENTE

What was also special was that there were already additional skins available almost at the same time as the model was released. The Padtrekkies pack for Quake 3 Arena by Angstroem featured Cpt. Kork, Mr. Spuck, No. 1 and Schrottie, four alternative skins based on Star Trek, which could easily make any player smile. 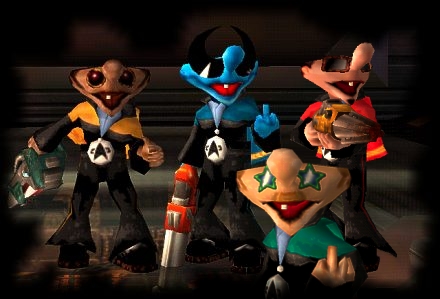 Many Q3 sites reported at that time about the new model and the skins and it should not take very long and ENTE’s PADMAN was voted Model of the Week on September 19th, 2000 on planetquake.com and was presented in detail. 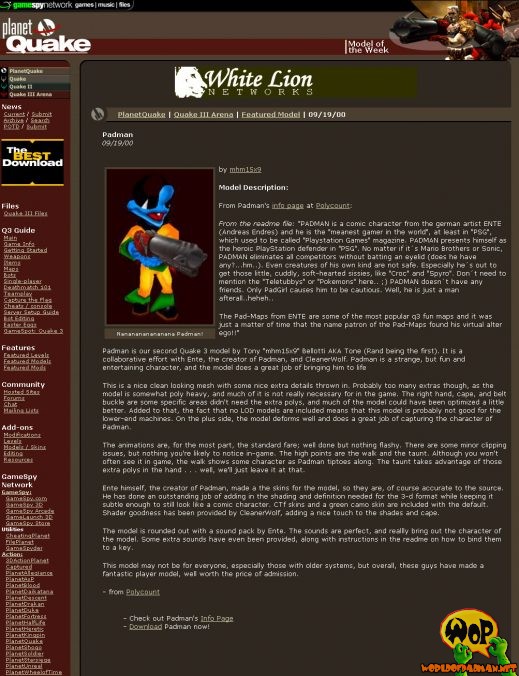 PADMAN as Model of the Week on planetquake.com

Shortly after that the time had come and PADMAN and the Paddtrekkies pack were also adapted and released for the just released shooter Star Trek: Voyager – Elite Force. It got even better, because Activision Germany asked ENTE to create exclusive versions of his maps for Elite Force, so that they could put them on a promotion disk and distribute them at the 9th FedCon in Bonn. This disc not only contained selected PadMaps, but also PADMAN and the additional skins for Elite Force. Among them was Shocker’s Hellpad, which was originally released for Quake 3 Arena in November 2000.

Activisions promotional disk with PadMaps and PADMAN for Elite Force

PADMAN gets even more colourful

Not that PADMAN ever lacked colour, but in the spring of 2001 ENTE launched the legendary PADMAN skin contest and even Paul Jaquays, who was still working at id at the time, agreed to be part of the jury. With the enthusiastic [PAD]Community participating, many new Q3 skins were created for PADMAN and Redlemons’ Corporal Padishment made it to the podium. ENTE himself lent a hand and released four more alternative skins; PadSoldier, PadRock, Pad-Ra, and BiO-Pad, which were of course out of competition. To honour the participants of the contest and the winner, ENTE completely revised his PadGallery and published it as PadGallery deLuxe, in which all PADMAN skins were immortalised. It really was a crazy time, which ENTE will remember fondly.

When the PadMod for Quake 3 Arena was released in the year 2004, the PADMAN player model was of course included, although only with a selection of skins. This remained so until World of Padman was released as a stand alone game in December 2010 in version 1.5. In this version the good old PADMAN had been replaced by a new 3D model including new animations created by DoomDragon. On the one hand PADMAN as the main character in the game should be polished up with a little more details and on the other hand this WoP version supported a new feature, where for each skin an own head model could be defined. Head and body should continue to fit well together.

Of course, the old model had its little problems as well. In some cases the UV map was not very well designed, so that the skins on the shoulders and shoes were sometimes displayed in a very distorted way. In addition, the stinky finger animation was often the stumbling block and since WoP was supposed to get a USK rating from 12 years of age, the team played it safe and decided to replace it with a thumb pointing down. So the old PADMAN model with WoP 1.5 was retired.