In this tutorial I want to show you how to insert weapons, weapon markers and ammunition bottles into your map and how to adjust settings. But before you start you should make sure that you have installed the latest version of World of Padman. With older versions before WoP 1.5 especially the implementation of weapon markers in the way described here will not work. Furthermore, it can’t hurt to have a look at the weapons page again, because there you will find all weapons of World of Padman with their default values clearly arranged.

Overview of weapons and ammunition bottles

In the following table you will find relevant weapons and ammunition bottles with their associated entity names in alphabetical order. The NiPPER is also listed there, although each player already has this weapon as a standard weapon automatically and does not need to collect it. It is therefore not very useful to position this weapon in your map, but the corresponding ammunition bottle should definitely find a place in your map. PUNCHY and iNJECTOR were deliberately omitted here, because the melee duck, in contrast to the gauntlet from Quake 3 Arena, is available to every player at any time. We didn’t even create an entry for the iNJECTOR in the entities definition file (entities.def), since this weapon only appears in the game mode InstaPad and, like PUNCHY and NiPPER, doesn’t have to be picked up by the player.

The weapon and related ammo bottle entities can be selected by right-clicking via the context menu under weapon and ammo, respectively, and thus inserted into your map at the position of the mouse pointer in the selected Radiant view. Like all items, weapons and ammo bottles fall to the ground when the map is started. To prevent this, first select the weapon or ammo bottle entity you have inserted and open the Entity Inspector by pressing the N key. Then place a check mark at suspended (spawnflags 1 will be set) and the entity will remain at the place where it was originally spawned. 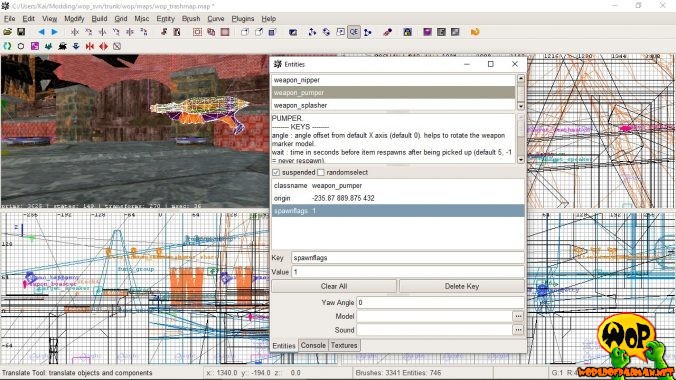 If a weapon or ammunition bottle doesn’t appear in the game even though you have placed it in the Radiant, it may be because they spawn too close to a brush. You can recognize this by the message “ammo_nipper in solid at (-496.0 1496.0 1648.0)” in the WoP console after starting the map. You can open the console with the key combination SHIFT + ESC. The three displayed numbers represent the coordinates of the respective entity in the Radiant. A solution is to position the entity a little higher or with more distance to the next brush.

All points where weapons appear on the map are marked in World of Padman with a so-called weapon marker. This is a small map object or model, which is available in different colored designs and had to be placed manually in the maps until WoP version 1.2. Since in some game types, such as InstaPad, no weapons are to appear at all or only at selected positions, depending on the game type, the remaining weapon markers will disturb.

Therefore, since WoP 1.5 the weapon markers are defined directly via the key marker in the selected weapon entity. Open the Entity Inspector again by pressing the N key and enter marker in the key field. As value you can enter orange, green, blue, black or purple in the value field and thus define the design. The marker will then automatically appear at the spawn point of the weapon, but only in the game, not in the Radiant. If a marker is not aligned properly, you can rotate it along the Z-axis by entering the key angle with a decimal value between 0 and 360. 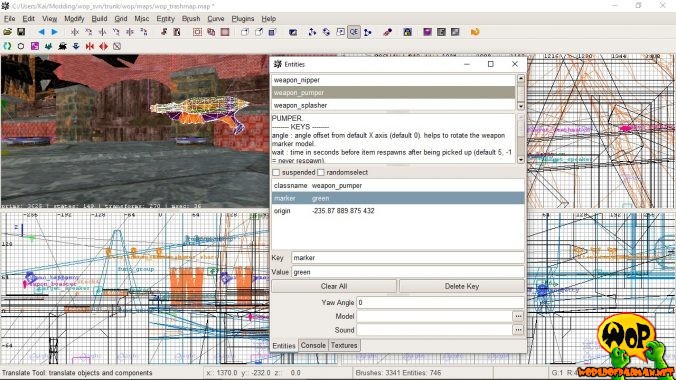 In the following gallery the different colored designs of the marker are shown again. We in the WoP team have agreed to always choose only one design within a map and to avoid mixing. This is of course up to you. 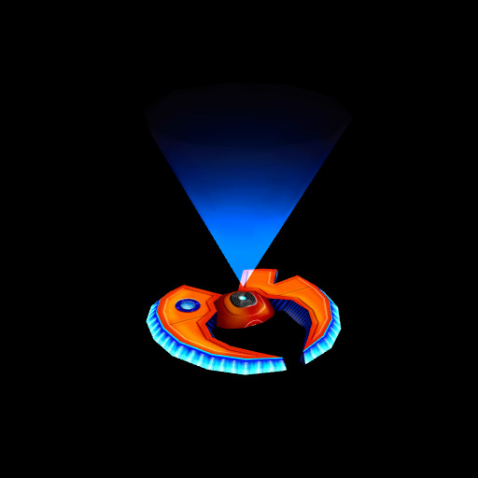 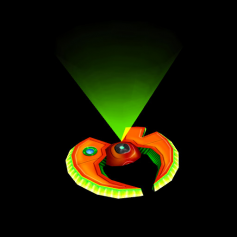 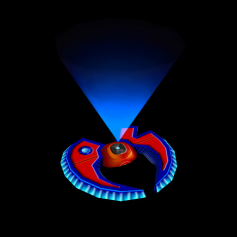 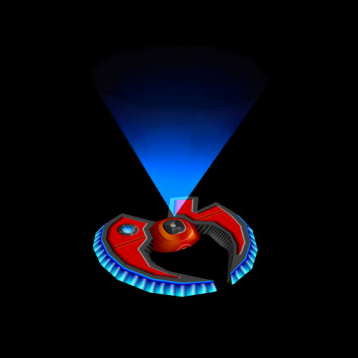 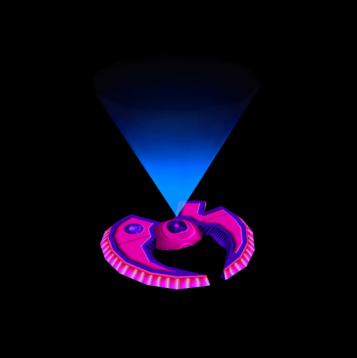 Weapons but also other items such as powerups and ammunition bottles can appear at the same point in the map in alternating or random order. This is sometimes useful for small maps when there is only little space for all weapons or other items. Therefore you have to place the two desired weapons in the map at the same place. It does not matter if the weapon models overlap in the editor. Now select both weapons and open the Entity Inspector again by pressing the N key. Afterwards enter key team and value weaponcycle1. 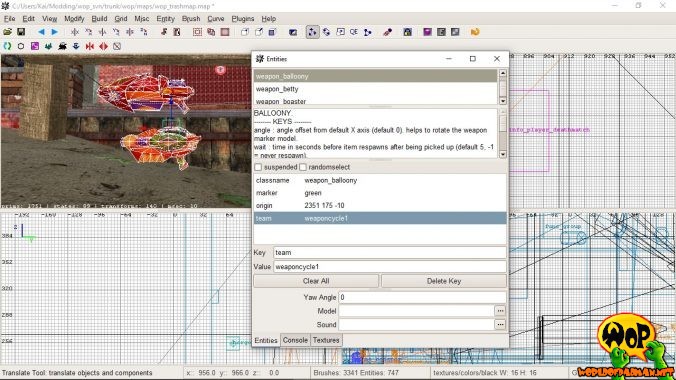 The key team ensures that the weapons are linked together, thus forming the team weaponcycle1. You can also define the value weaponcycle1 yourself and enter something for it. The only important thing is that both entities get the same value and that it is unique in the whole map. It is sufficient if the weapon marker is defined for only one of the two weapon entities. If you have done everything right, the two weapons in the game should now appear alternately after picking them up. If you want both weapons to alternate in random order, you have to check the box randomselect in the Entity Inspector (spawnflags 2 will be set). If a check mark has already been set for suspended, the value for spawnflags is automatically increased to 3. This can also be entered directly for key and value. 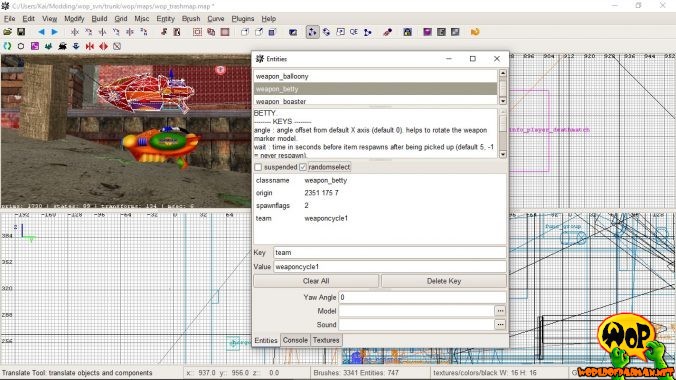 All keys and associated value ranges

In the following I will go into some more keys and associated values that you can apply to the weapon and ammunition bottle entities.

As already mentioned, you don’t need to place NiPPER and PUNCHY on your map. With especially large maps like the TrashMap it can happen that weapons are scattered far apart. In such a case you should consider which weapons could be installed more than once. In the TrashMap all weapons are present twice except SPLASHER, BOASTER and iMPERiUS, but that is really an extreme case. Speaking of the extremely powerful iMPERiUS, this weapon should be neatly hidden and should not be easily accessible. A spawn interval of 90 to 120 seconds should not be undercut. Our maps often contain a bottle of ammunition for the iMPERiUS. Like the weapon itself, this should also be neatly hidden or in a place that is difficult to access. 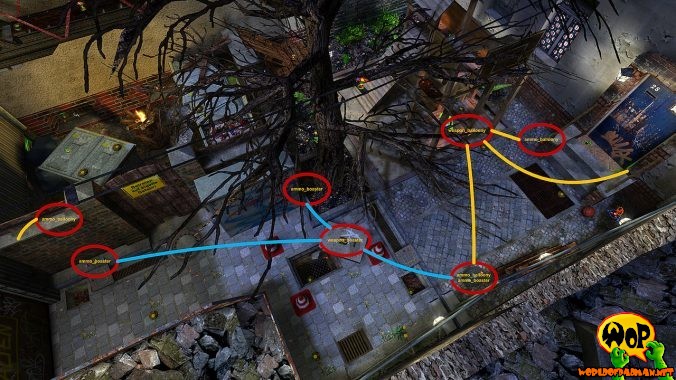 Finally, I can tell you that a good placement of the weapons as well as all the other items is a real challenge and the gameplay of the map elementarily depends on it. Therefore use all the possibilities of alpha and beta tests to have your map checked by experienced players in this respect. In most cases, the level designer is better at creating the map than he is at playing it and therefore cannot do without the experience of the players.