This month marks the 20th anniversary of ModDB. ModDB was originally started in July 2002 by Scott aka INtense! as a database for game mods with the goal of providing a place to go for mod content and the opportunity to collaborate. Back in the day, mods were uploaded to various game hosting sites and could now be linked together in one place. Later, ModDB became a host itself and modders could upload their content themselves and present it on their own profile pages. Like the scene itself, ModDB grew quickly and went through several redesigns, especially in the early years, with the fourth iteration in the iconic red design still existing today. Various spin-offs such as AddonDB, IndieDB, SlideDB with a focus on addons, indie games or mobile games emerged, but could not always successfully establish themselves as independent sites. Even the new concept under the name GameCore in 2008 with an increased focus on game news could not succeed. The ModDB concept was good from the beginning and still has its place in the World Wide Web. There are very few websites that can look back on such a long history. 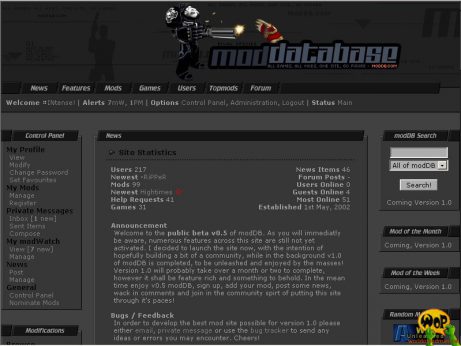 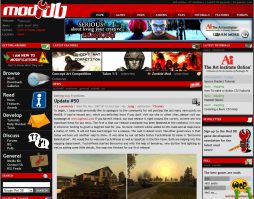 In 20 years of ModDB history, the community has grown to more than a million members and to this day the site contains mainly user-generated mod content. The first posting on our WoP profile page at ModDB is dated August 19, 2002 and was written by ENTE. It is about the then new commenting feature on ModDB and it was INtense! who commented on our first article. So we have been following this success story for 20 years as well. For the anniversary, you can once again vote for your favorites in five categories on ModDB among the top mods from 2002 to 2021: Best Total Conversion, Best In-Universe Mods, Best Multiplayer Mods, Best Modern Mods and Best Classic Mods. Have fun voting.

We wish Scott and his team all the best for the years to come.