A few days ago ModDB announced their annual Mod of the Year Awards which goes into round seven in 2008. Like known from the last years the event will proceed in three phases. In phase one, starting from January 2nd to January 16th of 2009, you are able to nominate your favourite game mods and independent games titles of 2008 for the top 100 Players Choice list. Therefore you need to check the profile of a game or a mod and simply click on the vote button. In phase two, starting from January 17th to February 2nd of 2009, you will be asked to vote for your top 3 nominates out of the top 100 Players Choice list. In the end of February phase three of the event will showcase the Players and Editors Choice winners of 2008. 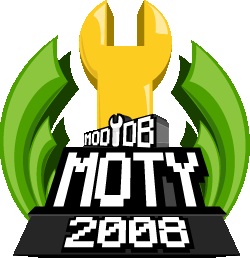 The award categories of the Players Choice will be:

Last year we were voted into the top 100 list and won 4th place of best indie games alongside other great ones like Tremulous and Warsow. That made us very proud! This year will change everything. Due to the delay of WoP 2.0 and as written down in the event rules we won’t make it into the top 100 Players Choice list, even if we would have enough votes. The rule says that any mod or indie game can make the top 100 except those released in previous years which have not released a significant update in 2008. That is why we please you to pay more attention to the first released mods for World of Padman like the CTF-Mod or the X-Mas WoP. In contrast to the game they were made for, they should have a better chance to appear in the top 100 list. Check out the WoP mods list and if you want your mod listed there simply add it.

We are sure the upcoming Mod of the Year Awards of 2008 will be exceptionally even without World of Padman. Prepare to vote your favourite mods and games. A happy new year to everyone.