As Christmas Eve gets closer and closer, the developers of World of Padman present us more and more red-hot news. Today we would like to introduce to you the iNjECTOR, which was made for the InstaGib mode only. The iNiECTOR will fire like the SPLASHER, but the shot frequency will be higher, so that you can shoot faster. We already have mentioned it in previous news and you could already take a look at the weapon without textures in the leaked video for WoP 1.3. Now it is colourful and … how to describe this one? Take a look for yourself.

One team member told to us that the design was outlined fast. The model was again created by doomdragon and ENTE skinned it. Then the design was reworked two more times. Actually, that was an absolute normal procedure up to the fateful day when somebody wrote: “the name does not suit it, let us pick another”. Days and weeks passed until one of the team suggested the cool and definitively suitable name iNjECTOR.

The Padman, we, the news reporters, and of course also the whole developer team behind the curtain wish you a happy party and nice Christmas days. 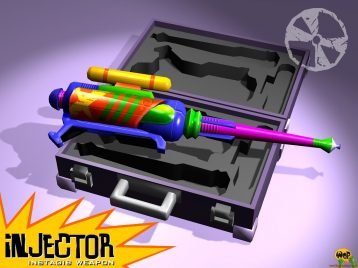 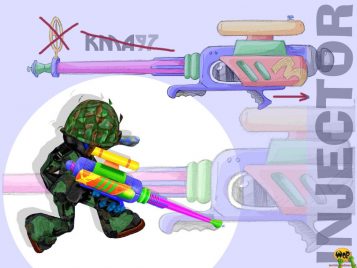