The third map of the soon to be released map pack will be the colorful PadCrash. With this map ENTE wanted to take a totally different approach. It was supposed to differ noticeably from his previous maps. While his other maps focused mainly on the visuals, PadCrash was created with game play in mind. Thus during its creation ENTE had the map extensively tested by experienced players (clans). Similarities to the well known Quake 3 Arena map DM17 are of course not just coincidental. ENTE deliberately was gearing towards that map, only his version was going to be a lot more colorful. 😉 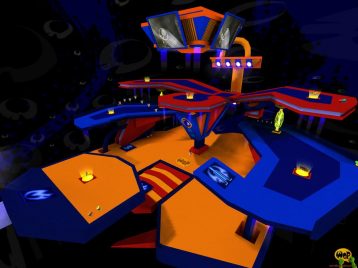 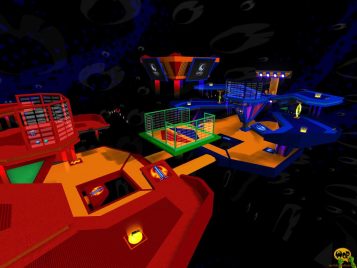 Since there have been excessive tests for the map back then, ENTE decided to keep it as it is for the WoP stand alone version and limited the changes to small fixes like a couple of new textures here and there. In the old PadPack, which was released for the PadMod for Quake 3 Arena, there were two different versions of PadCrash. One small version which also worked well with duel matches and the slightly bigger DM17. Now in the stand alone map pack you will find three versions of PadCrash. 😀 The third version is a Big Balloon map with a twist. In this map there are going to be two team bases with one balloon located within each base, the third balloon is located between both bases in some sort of neutral zone. This setup promises a lot more team play and a completely new Big Balloon feeling, which you definitely should not miss. 🙂

Well, then when is this PadPack going to released; you are probably asking? If everything works out, you can expect it within the next two weeks! 🙂