It’s been a while since we reported about it, but maybe some of you still remember the BOINC team of World of Padman. BOINC is a program for distributed computing that makes the idle time of the computer (Windows, Mac, Linux) or Android device available to scientific projects. Thanks to Smiley some WoP players started already in 2006 together as a team with distributed computing for different projects, among them well-known representatives like SETI@Home, QMC@Home, Rosetta@Home and Climate Prediction. Since that time, a total of more than 5.5 million credits have been collected, with the WoP team currently ranking number 720 in Germany. 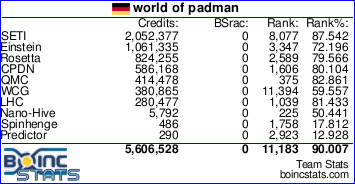 BOINC statistics of the WoP team

While some projects have already stopped working or no longer assign new tasks, there are others that have announced the fight against the corona virus. These include in particular the Rosetta@Home project, which uses computing time not only for the precise modelling of the structures of important proteins, but also for the design of new proteins that are important for the disease and for the production of new, stable mini-proteins that can be used as potential therapeutics and diagnostics. If you would like to learn more about the COVID-19 project, please refer to the corresponding discussion thread on the project page.

Also, the IBM-supported World Community Grid, which combines several research projects on a single platform, has announced that it is launching a new research project called OpenPandemics in collaboration with scientists from Scripps Research to look for possible treatments for COVID-19. This project also requires massive computing power to perform millions of simulated laboratory experiments. OpenPandemics is to be launched soon, and anyone interested can already subscribe to a mailing list on the project website.

If you want to join the WoP team again or participate for the first time, you only have to download and install the BOINC client (the one without VirtualBox is sufficient), register for the project or create an account and participate in the WoP team. Of course the participation is for free, but not completely free of charge, because of course electricity is needed for the calculations. But we would be very happy about your support!