That is it, you have voted your favourite WoP maps and thus put two victors on the winner’s rostrum. PadGarden and PadKitchen fought their way to the top with the same number of points and seem to be your favourite Lilliputian maps. Actually, that should give ENTE something to think about, he could not top the old maps with his new ones after all. 😉

That the PadShip has not reached a higher position makes ENTE feel a bit sad because this is one of his most labour-intensive Lilliputian maps, but the reason for the map not going down well will probably be its size. It went similarly with poor MopAn whose jail undeservingly took the last place. The big maps seem to be too large, often you are more busy with looking for opponents than with fighting. Additionally, the jail map is not quite as colourful, something the good MopAn wanted to reckon with in the new version of his map. ENTE was very surprised with the placing of the diner, especially because of this map he like to tease our Harmonieman a bit. 😀 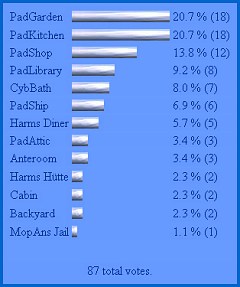 But ok, the map vote has finished so it is time for a new vote. This time you have two votes, namely for your favourite spray room. So then, be well-behaved and make your ticks into the vote boxes. 🙂