Chrismas is over and the new year 2012 still lies ahead of us. 2011 was a WoP year with ups and downs and lots of releases. WoP 1.5 was released on December 28th 2010, followed by the 1.5.1 hotfix on January 24th and the 1.5.1.1 hotfix on June 29th. Due to the WoP 2.0 release struggle this was a very big release after three years without any releases. We provided lots of new content like new player models and new maps, the long anticipated game mode Capture The Lolly, all maps polished and over 2,000 textures revised. This release was possible after the team stopped working on the single player mode. This was a hard decision for us but from today’s point of view a good one. 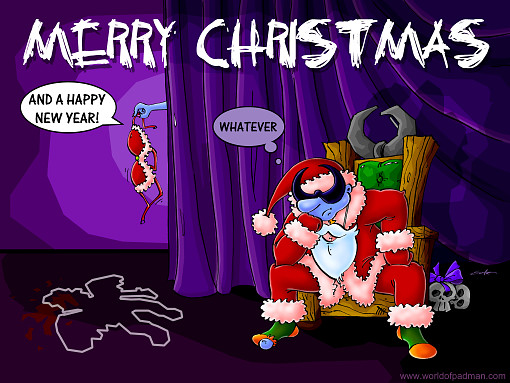 After the release of the 1.5.1 hotfix ENTE stepped back from developing the World of Padman game after more than 10 years. This was a major loss because ENTE always kept the team motivated and promoted the team working culture. Also other team members went inactive but four PadMembers vowed to keep on developing the game and to bring you the new version 1.6 of World of Padman.

Therefore we decided to change the release model because we didn’t want to make you waiting for another long time. We provided the beta releases 1.5.2 to 1.5.5 in shorter release cycles and this was also an attempt to involve the entire community helping us to develop the game. Your feedback should help us fixing bugs and polishing the game play, which was our new target after the big 1.5 release. But this strategy doomed to fail from the very beginning, cause we nearly lost the whole player base due to the WoP 2.0 release struggle and also the 1.5 release was not able to revive the community like expected. Nearly no one visited the beta-server and bug-tickets were rarely seeded.

So, what are further development steps in 2012? First we want to bring you a new patch fixing bugs in version 1.6. Therefore we keep beta tests and releases internal again. PadWorld Entertainment is a small team developing the game these days and that’s why help from the community to find bugs and game play issues always comes handy. If you are interested in beta testing drop us a line. Due to internal reasons all upcoming releases will be cumulative patches for the last WoP 1.5 full release. We will always release a unified archive file containing binaries for Windows, Linux and Mac OS X. Furthermore we keep on using Desura as digital distributing service to keep your installation auto-patched. We have also future plans for some community events in 2012. Details will be announced separately soon.

We hope you had some Merry Christmas with your families and the whole team wishes you a happy new year.