World of Padman 1.2 was released on Desura a couple of days ago. Desura is a new digital distribution system like Valve’s well-known Steam platform or the CrosuS Mod Manager made by Isotx, where WoP 1.2 is available also. The advantage of Desura is that free indie games and mods are able to release there without paying for the service. 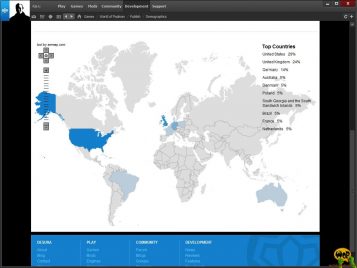 Desura is developed by the team behind ModDB and IndieDB and shares the same database content. For us, as an indie game developer, it offers a whole bunch of possibilities like digital distribution, automatic patching, closed beta testing etc. Also, it offers some nice statistics like demographic and geographic distribution. Now we are able to find out the average age at which people are playing our game and where around the world it’s being played. It’s some outstanding piece of software and continues development where CrosuS stopped. We think it’s polished enough to compete against Steam. We decided to include Desura into our beta test phase for WoP 1.5. We are sure when Desura goes open public it will start playing a big role in the indie games and mods scene.

Desura is still in a closed beta phase but will be released very soon.