Welcome to the year 2020! Wow, who would have thought? ENTE’s PadMaps will be 20 years old this year, because it all started in 2000 with his first Map PadCastle for Quake 3 Arena. Actually, it was more out of frustration, because ENTE wanted to create his comic character Padman as a player model for Quake 3 Arena. But this turned out to be not so easy and he did not find anybody who was willing to do it for him. Back then ENTE’s Padman was the “meanest gamer in the world” in a comic series in the German console magazine PlayStation Games (later PSG) and was simply too unknown internationally. So ENTE made the decision to make Padman internationally known in the Quake3 scene. So in February 2000 he created his Map, a small knight’s castle in gothic style with some Padman motives from the comics on the walls.

The plan worked out and the PadMaps and Padman quickly found many fans. So the [PAD]Community was born and a real PadMaps mania developed, which was the foundation for the development of the PadMod for Quake 3 Arena. All this finally led to the development of our wonderful freeware fun shooter World of Padman, which you can still have a lot of fun with today. You can download ENTE’s PadMaps for Quake 3 Arena, Elite Force, and Jedi Knight 2 directly from our website. 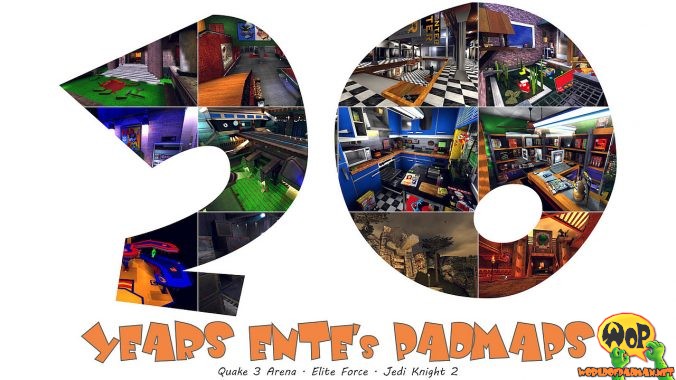 To celebrate the 20th anniversary of ENTE’s PadMaps, we have created an anniversary wall calendar for the year 2020 for you to print out yourself. On every single calendar sheet one of the PadMaps is shown and all historical publication dates are included. You will be able to relive this great story on our website in the coming months as we will post a 20-year special on each of these dates.

All that remains now is for us to wish you a happy New Year and have fun with the calendar!